The -k' plural suffix in Armenian is well known.

Masis Mountain ( so the root is the Masi )

Acharyan also suggested that Tp'lis (modern Tbilisi) was possibly another such a example.

Moks is remarkable because it is attested in Graeco-Roman sources in the form of Moxoene. Which implies that this shift typical to Armenian language is attested in those old texts.

Armen Martirosian mentioned the 13th satrapy. I want to add few notes in this subject.

The Greek sources about Armenia should be examined with great cautious. They are different from cuneiform writings which are left by state just at the moment of the event.

Here I attach a map of Achemenid satrapies which is based mostly on Persian sources. Greek sources that contradict to Persian one are ignored. As one can see there are no such things like 13th or 18th satrapies. There is a large Armenia divided in three regions one of which is the Colchis. Eastern border of Armenia satrapy reminds us the borders of Urartu which didn't controlled fully the Urtekhi (Artsakh) while the Etiu is fully in Armenia. So where are those Alaroid, Saspires and Matienes? Well the only source about this tribes and their mysterious 18th satrapy is the Herodotus . You can see the list of sources here.

There is no other source about 18th satrapy other than Herodotus. Even more non of this tribes can be securely linked to preceding cuneiform texts. Just to understand how reliable they are let's remember the so called Paktika mentioned as part of 13th satrapy with Armenia. I couldn't find a toponym that one can link with this term. Well Paktika do exist but it is in Afghanistan.

So if we find such a confusion then we can expect confusions elsewhere also.

Saspir - No mention in Urartu. It is probably related to Sper with extra Kartvelian Sa prefix. Then this tribe was living in more Western region north of Erzrum Alternatively Saspir was a Scythian tribe from which Sper ( modern Ispir) derives. If they were Scythians so they would barely had an impact on locales.

Alaroid - Even more puzzling because it supposedly appeared in the place of Etiu. Some linked it to Urartu. The theory was that Urartians have found refugium in modern Armenia. But that is quite dubious if we take into account the archaeology. One possibility is that this name is a distorted version of Haldiuri mentioned in cuneiform in more Western regions. The other possibility is that it represent Udur-Etiu. With d->r transition becoming Ururetiu. And finally it is the oldest mention of Ayrarat province. Anyway it is quite doubtfull that it was a new tribe unrelated to preceding tribes.

Matieni - was living in the place of Mannai. Once more the link with Mitanni attested at LBA is very dubious. No mention of Mitanni exist at Iron Age. Quite possible it was an offshoot of Medes Iranian tribes. But there is another solution. It is yet another distortion, from Mannai. Other historians mention them as Mantieni or even Martuni. 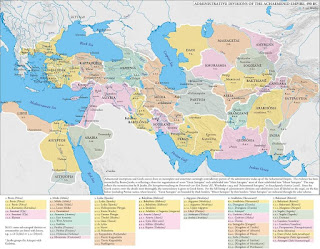 The most frequent haplogroup in Georgia is the G2a1. The Caucasian subclade of G2a1.

This Y dna was a minor (rarely occuring) Neolithic farmer lineage from Fertile Crescent. The most probable homeland is the north Mesopotamia or Zagros. Indeed the oldest G2a1 that we have is from South Zagros Late Neolithic. From there it moved to Central Asia with other Iranian Neolithic farmers. We have one case in BMAC (Uzbekistan) Bronze age culture. Also one case in a Medieval burial from Kyrgyzstan. And another in Avar nomadic burial.

Another branch of G2a1 Z6653 moved to South Caucasus. It is in Caucasus that this haplotype had a successful founder effects. One important expansion occured at Middle Bronze age (probably after Kur-Araxian culture 2400bc) and another later in antic hellenistic? period.

G2a1 was found in Koban Iron age culture in North Caucasus. So at some point in Late Bronze age it crossed Caucasus and moved to North also.

It is not important what language it was speaking in deep Neolithic past. But the extremely high levels among Svans implies that this haplotype was present in Proto Kartvelian community and expanded a lot with it. Linguists propose a MBA divergence for Svans from Proto-Kartvelian so here linguistics and genetics are in accordance.

Judging by the data we have the Proto-Kartvelian community was probably living in central or central-western parts of modern Georgia. So should they had an important expansion toward historic Armenia (Erzrum region) then we would expect an important presence of G2a1 among Armenians. But it is not the case.

This haplotype had an old presence in Caucasus. It was found in Mesolithic (7500bc) Georgia in Kotias Klde site. Later with the arrival of farmers it's numbers probably declined. But it is still frequent in Georgia. Once more if we had an important migration from Georgia to historic Armenia one would expect to see them in Armenia. But it is not the case.

Here we must keep in mind that not all cases of SK1313 / Y12379 found in Armenia are from Georgia. We don't have Mesolithic data from ancient Armenia. There is little doubt that the same haplotype was present among ancient Armenian hunters. I did this comparison to emphasize once more how different are the proportions of various Y dna in this two neighbouring nations.

Here another opinion about Early Iron age grooved ware and Mushki. She is sceptic that Mita of Mushki attested in Assyrian texts is really the Phrygian Midas.

Uwe Muller discuss various aspects of archaeology in Iron Age Anatolia. She is generally supportive that grooved ware came to Isuwa Melid regions from East, but not South Caucasus.

PS I don't have a definitive opinion on this subject. I have no single doubt that Mushki attested at 12th century BC were from North Armenia. But the later ~700bc Mita of Mushki could be the Phrygia. This kind of things occur when a name is transferred from one ethnicity to another. 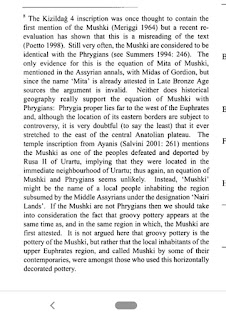 Bombard published a relatively new paper about Armenian and it's role in helping understanding other IE language's phonology.

There are two competing views about the phonology of PIE. Glottalic theory suggests that PIE had ejectives. They sound similar to Armenian p' t' k' փ,թ,ք. Germanic also preserved ejectives.

The Glottalic theory was supported by Gamkrelidze and Ivanov who made a case that PIE homeland was close Caucasus, because Caucasian languages also have ejectives.

Glottalic theory was not widely accepted until now.

The dramatic expansion of Yamna is related to the introducing of food producing in Steppe. Suddenly large grasslands became pastures for herding, which itself resulted in dramatic increase of population.

Farming was invented in Near East , Fertile Crescent. See in maps. This period is known as Neolithic and starts at 9500 BC. The oldest evidence of crop raising is found in Diyarbekir region of Turkey. Farmers moved to different directions. They had diverse haplogroups and almost certainly were speaking different languages.

For IE puzzle there are two main options.

1. PIE was the language of farmers living in historic Armenia who moved to North mixed with locales and expanded there as Yamna.

2. PIE was the language of Steppic hunters who learned farming (borrowed terminology) and metallurgy from Near Eastern farmers. And then expanded.

There is a third option also that farmers of west Ukraine who themselves were from Anatolia affected Steppe. But this option is not anymore popular after the paleogenetics findings.

In both cases we would have Near Eastern terminology in IE. Some examples.

gud in Sumerian means ox, bull and we have kov, cow in IE languages.

tawr in Semitic and IE languages related to cattle.

urud in Sumerian means copper, and hreud is the red color in PIE.

Also numbers like six, seven and word wine but this latter probably is from IE to Kartvelian 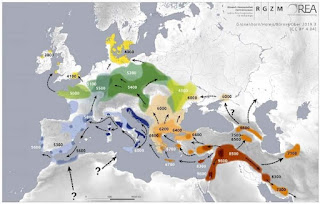 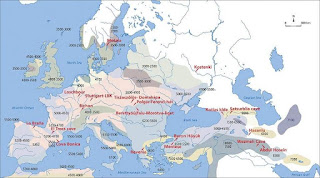 There are many maps circulating on the Net about Steppe migrations.

There are many maps circulating on the Net about Steppe migrations. But most of them are obsolete with errors. With wrong dates, that are confusing.

I present a map which is based on the latest ancient DNA data. It was published in Naramsimhan 2019 paper. This was a very large paper dedicated to Aryan origins with hundreds of samples.

Not only migrations are good with correct dates, but also You can see the impact of Steppe ancestry.

There are no migration lines toward Balkanes and Near East because the sample sizes from this regions are not yet sufficient to have a detailed picture.

Nevertheless in the same paper (in supplements) the authors analysed a sample from NW Iran BA (2300bc) and they have found that it had 50% of Steppe ancestry. They assume that it was a result of migration, obviously not via Central Asia. 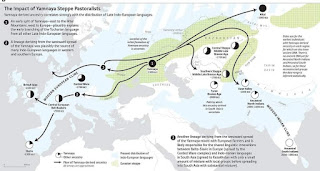 Strabo mentions the presence of Thracian tribes called Ainians. In Utik but also probably somewhere in NW of Shirak.

A link of Ainians with Urartian period Igani/Ijani was proposed by Sargis Petrossian. The city Ani is also probably a derivative of this term.

Imho it looks plausible, because both this places were part of Lchashen culture. From which we have the European Y dna I2c2.

And here an archaeologic news from Azerbaijan. They think they have found the antic city Ainian of Utik.

Other possible Thracian tribes in Armenia Treres and Sarapares are also attested near Utik and Shirak.

We had a discussion about the Sumerian word for horse

We had a discussion about the Sumerian word for horse.

Here an excerpt from Pennsylvania Sumerian dictionary where the word armanu is also equal to "gesh hashur kurra".

Which can be translated as a Tree (gesh) of Apple (hashur) from KURRA country. This whole thing meaning apricot tree.

Notice the same KURRA country appears in the horse word as Donkey of KURRA.

Imho KURRA was phonetically pronounced as Armanu. But I could be wrong because cuneiform reading is quite complicated science. 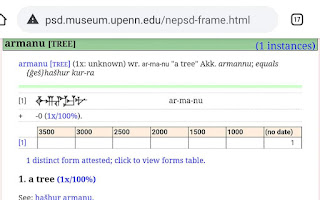 Another word with similar distribution to the word camel.

Another word with similar distribution to the word camel.

kapi in old Persian and Sanskrit

The word in Armenian is usually believed to be a loanword from Persian, but it could be a word of substratic origin. Assuming that Indo Iranian kapi is a loanword from BMAC who themselves have ancestry from NW Iran this latter is quite possible.

Other IE languages have other words for monkey.