We have discussed about various tools for researching autosomes

We have discussed about various tools for researching autosomes. One of such a tools which is widely used in Academic papers is the qpAdm. It is similar to fst in a way that it works on alleles. It produce models of populations of various degree of probability called tail prob.

While ago Davidski produced one such an example. (see links in comments) But back then populations from Arslantepe or Alalakh were not available. Recently I had a discussion in Russian Molgen and a user from Georgia produced an alternative models. Their tail prob is as low as those from Davidski nevertheless they make more sense because they rely on more proximal pops.

It must be noted that qpAdm is not easily maniable as G25/Vahaduo. Finding there a good model is quite hard. More harder is to make the tail prob higher than 0.5.

And another with lower tail prob

And this was the Davidski's model

All those models have poor quality. It's quite obvious now that for good modeling of Armenians an Urartian sample is mandatory. But it is also clear that rumours that Arm_LBA is a dead population are premature. It seems that it will be impossible to have a good model of Armenians without Arm_LBA also. (Lchashen-Metsamor). The real number would not be as high as 60% but not lower than 25-30% also.

Mushki is attested twice in Urartian texts. Both are from Rusa son of Argishti period. They are attested in an atypical text where a list of eight countries is mentioned. The text do not describe a specific campaign but rather is a summary of numerous campaigns, while the eight countries are the most distant places where Rusa's army reached moving in all directions.

Here is the raw text.

Now let's locate this countries. And their direction relative to Biaina.

Targuni - unknown but if is equal to Derjan then north west

As You can see the translator arbitrary added the second Hatti after the Mushki based on the assumption that Mushki was in Hatti. In the raw text there are no two Hatti. Mushki is just another country as others so it can have any direction. So what was this direction?

Well given the logic of the text were eight countries are mentioned and for each four side of the world we have one pair of two countries we can deduce that Mushki was in North west side of Urartu. Placing them in the West would mean that the scribe mentioned three countries in the West leaving the the north/northwestern side with just one country (Targuni). How to check this? Well let's look a similar text but with little bit different set of countries.

This time the text is broken. Only six name are readable. It looks two are missing (Assyria and Etiuni?). The rest is similar except there is a new country Khalitu instead of Targuni. Khalitu is almost certainly the Armenian Khalti-k' which is unambiguously placed in north western direction relative to Biaina. So the assumption that Targuni was in North West was correct. Once more we have two countries in the West and it would make sense that Mushki was near Khalitu and NOT near the Anatolian group (Tabla, Hatti).

This location in the North would be fully consistent with Greek sources placing Mosch-oi ( Mushki) in Pontic region or near Meschetian mountains.

If new inscriptions with the term Mushki reinforce this location then we will have another hard evidence that early Iron Age Mushkis mentioned by Assyria were initially from North Eastern regions of modern Turkey.

From already published papers we know that North Caucasus had two distinct populations that most of the time had little interaction with each other.

One was in plain/steppe parts of North Caucasus (here after NC). This Steppe NC was connected to Eurasian plains in the North. The second population was living on the Northern slopes of Greater Caucasian range. It had South Caucasian origin and they settled there mostly after the Eneolithic. (after 4500bc). Currently there is no evidence that those northern slopes were inhabited in Mesolithic and even in Neolithic.

This dichotomy was so pronounced that it was present in Maykop culture which was an unified culture between Steppe and Mountainous NC, but still inhabited by two distinct populations. The Steppe Maykop (Q,R1) which was of Siberian origin and Mountainous Maykop related to Leyla-tepe (L, T, G2, J2b2a?).

When Yamna formed (3300bc) and started to expand, it moved to South also and conquered the lands of Steppe Maykop practically replacing them without mixing. There a new culture formed which usually is labeled North Caucasian culture ( first map the blue culture ) but a less confusing name is the Kubano-Tersk. We have ancient DNA from Kubano-Tersk people and they were predominantly R1b-Z2103. Genome wide ( autosomes ) they were identic to Yamna.

After 2800bc Yamna transformed into Catacomb culture with the same Y DNA. Catacomb culture had a strong influence on Kubano-Tersk which is not surprising because they were kinsmen. It basically absorbed it. Was this absorption due to cultural influence or there was another migration is not clear.

You can see that on the second map. Then one group of unknown part of Catacomb culture moved to South Caucasus via Daghestan no later than 2400bc. We discussed a lot this event.

Hrach Martirosyan once expressed an opinion that Armenian do show evidence of archaic contacts with Abkhaz-Adyghean languages who are usually associated with Dolmen culture. If that is true then it must have occured during that Catacomb period or slightly later.

The catacombicized Kubano-Tersk culture continued to evolve and it started to mix with neighbouring Mountainous NC who where predominantly J and G. This gradual mixing will lead to the formation of Koban culture (1300-400bc)

At 2200bc Catacomb culture ends and two new groups appear in his place. One is called Multi-Cordoned ware (2200-1800bc) which was mostly in Pontic Steppe while the other is labeled Lola. Lola was in the West of Caspian sea. The remarkable thing about Lola is that it was a partial resurrection of old Steppe Maykop people who were of West Siberian origin. We don't have ancient DNA from Multi-Cordoned ware. But in most likelihood it was similar to Catacomb with some possible influences from Carpathian mountains. There are some serious reasons to believe that Multi-Cordoned ware was speaking some kind of Balkanic languages. Some even proposed a link with Mycenaeans but with current data it's unlikely. For us it can represent interest if we learn that the I2c2 in Armenia and E-V13 in North Caucasus are related to this culture activities. 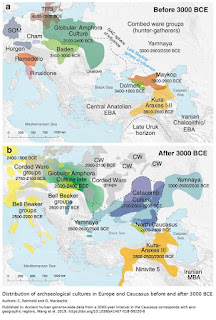 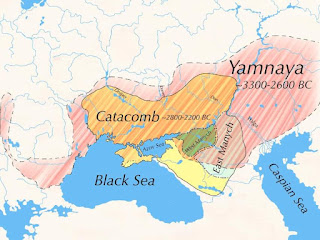 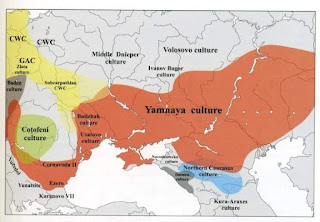 Just to have something to compare to previous threads

Just to have something to compare to previous threads. This are fst distances calculated in Lazaridis 2016 paper. Fst is a tool to calculate the distance between two pops based on allele by allele comparison. Unlike Vahaduo/G25 and Gedmatch oracle which works in a different way. So the results of FST and Oracle/Vahaduo can be quite different.

In fst a drift due to self isolation increase the distance. As You can see here Assyrians are more distant from Armenians than Kumyks something impossible in Vahaduo/Oracle. 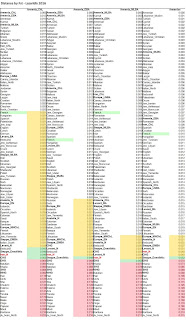 For some time I started to doubt that the term Alarodi-oi in Herodotus denotes Urartu.

For some time I started to doubt that the term Alarodi-oi in Herodotus denotes Urartu. I noticed Zimansky also assume that Alarodi was a distinct group from Urartians. The term is attested only in Herodotus and no any other source knows them. The other strange thing about them is that they are described as having similar clothes and weapons with Saspeires and Colchians. Which almost certainly was not the case for Urartians.

Another possibility is that Alarodi was the the name of Uduretiu with d>l shift. Uduretiu-ni was a locale Etiunian term most probably meaning Water Etiuni. It almost certainly was present in ancient Armenia before the arrival of Scythians.

as far as I know d>l shift is unknown for Armenian. But such shift seems to have occur in Scythian languages.

We know now that it was Scythians and possibly their allies Etiunians who are to blame for the Urartian infrastructure destruction in modern Armenia. After Urartu lost the control of modern Armenia Scythians must have create few polities here. One of them could be centered around lake Sevan and had picked up the locale name Uduretiu which after the Scythian shift could become something like Ulureti or Alaredi.

This theory can work if the d>l shift occured before Herodotus lived. So it would be interesting to hear the opinion of linguists on this subject.

A late Scythian sound change from /d/ to /l/ established the Greek word Skolotoi (Σκώλοτοι), from the Scythian *skula which, according to Herodotus, was the self-designation of the Royal Scythians

We use frequently this terms. So such a table is needed.

We use frequently this terms. So such a table is needed.

The archaeologic periodization of modern Republic of Armenia. Notice other parts of historic Armenia could have slightly different periods.

Currently we have ancient DNA from Late Chalcolithic to Early Iron Age. Next year I hope we will see Urartian period DNA. 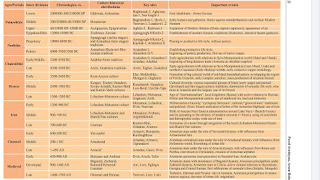