We have new regional data from Urfa

We have new regional data from Urfa. Thanks to Sunshine Shoghig Shahinian who provided the files. The data was analyzed by Robert Navoyan and me.

1/ The first chart shows the closest populations to Armenians from Urfa. As expected the Armenian average is one of the closest. But Erzurum is slightly closer.

2/ The ancestry proportions in the second image shows that Urfa Armenians have similar structure compared with other subgroups. The main difference is the slightly higher South Anatolian Neolithic ancestry which is consistent with their geographic position. They have also lower Steppe which makes sense given the distance from Caucasian range. To my surprise they don't have extra Levantine ancestry. Their Levantine ancestry is equal to Erzurum ( from Javakhk ) levels which is quite interesting. Because it can mean that in the past Euphrates was used to move to North from Upper Mesopotamia. It's also consistent with the fact that the kingdom Dayene/Diaukhi in Nairi was initially in the south then moved to North toward Erzurum region. Though this result can be the consequence of earlier or later events.

3/ The third image is a PCA. Consistent with the previous analysis the Armenian_Urfa has a slight shift toward west/Anatolia and partly overlaps with Greek_Cappadocia. Despite similarities with Assyrians in Gedmatch the Urfa Armenians are not pulled toward Assyrians.

4/ And finally we wanted to compare Urfa Armenians with an ancient DNA from Titris Hoyuk Early Bronze Age. This site is close to Urfa. Well it turns out that the closest modern pop to a local Bronze Age sample are the Urfa Armenians. This is a remarkable finding. It must be noted that this do not mean that no any migration occured since EBA. They almost certainly occured simply those migrants were not very different from Titris Hoyuk.

Also one should not confuse this result with the closest ancient DNA to Urfa Armenians. The closest aDNA to Urfans is still the South Caucasian Neolithic like for all other Armenians. This type of ancestry which we label Central farmers was present all over historic Armenia. And Cayonu008 sample showed that it was present near Urfa also since the Neolithic. But this a subject for different topic.

PS I want also to thank Tsolig Shahinian for her activism. 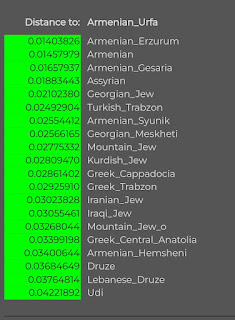 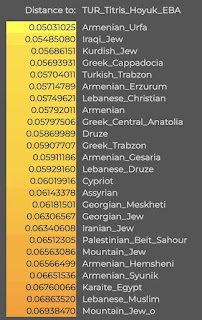 Strabo reports that in ancient times there was a large lake ( sea ) in Araratian plain.

Strabo reports that in ancient times there was a large lake ( sea ) in Araratian plain. It must be added that this is true. But it was in Neolithic times and not in Iron Age. Somehow the memory about this lake was kept.

Then it disappeared. Maybe due to earthquakes? Who knows.

The Araxes also in Armenia, descending from the mountains, is said to have spread itself in ancient times, and to have overflowed the plains, like a sea, having no outlet; that Jason, in imitation of what is to be seen at Tempe, made the opening through which the water at present precipitates itself into the Caspian Sea; that upon this the Araxenian plain, through which the river flows to the cataract, became uncovered. This story which is told of the river Araxes contains some probability; that of Herodotus15 none whatever. For he says that, after flowing out of the country of the Matiani, it is divided into forty rivers, and separates the Scythians from the Bactrians. Callisthenes has followed Herodotus. [14]

The name Urdi is attested in Urartian cuneiform texts.

The name Urdi is attested in Urartian cuneiform texts. It matches perfectly to Armenian word ordi (որդի) meaning son, offspring. This is a native Armenian word. Cognate of Greek portis and Sanskrit prthuka.

There was also a noble family Orduni whose name also could have been derived from the same root.

If this Urartian name is really related to the Armenian word this could mean that the p>h shift had already occured in Armenian language before Urartian period.