Uruatri ( other proposed variants Uruarti ) is mentioned for the first time circa 1275bc during the Shalmaneser's campaign toward lake Van.

Uruatri ( other proposed variants Uruarti ) is mentioned for the first time circa 1275bc during the Shalmaneser's campaign toward lake Van.

According the Bryce's Routledge handbook Uruatri was a geographic term denoting eight lands in lake Van bassein with dozens of cities.

In this list, two of terms were probably mentioned in Hittite texts as lands being part of Azzi. It is Himua and Uatgun. If true that is quite remarkable. [link in the comments]

Another term Zingun has been proposed to be linked with Urartian Ziuquni. Which was in lake Van bassein also. And another land called Luha looks intriguingly close to city Luhiuni that was in land Erkua around mount Ararat.

Another interesting thing is that at last four lands end with -gun. Was this a real suffix or just a corrupted form of Urartian -kuni/-quni like in Ziuquni?

Unfortunately no personal names are mentioned.

The most interesting thing is that three centuries later Urartians themselves never used the term Urartu even when they were writing about their country in Assyrian. They were using terms Biaina, Nairi and at two occasion they used KUR URI to mention their land.

Here an important question emerges. If Urartian never used the term Uruatri/Urartu who was using them? Who coined it?

And why Assyrians decided to differentiate Uruatri/Urartu from other Nairi lands despite the fact that Urartian themselves were feeling themselves as part of Nairi.

Maybe Assyrians noticed an ethnic difference from Nairians. Or maybe not. 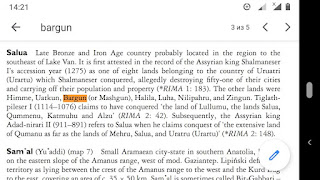 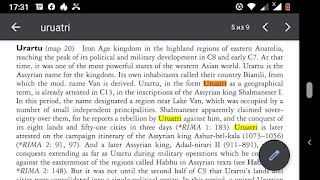 I updated the story of R1b-V1636. This lineage along side of small number J1-s was almost certainly involved in the introduction of Caucasian genes in to Eneolithic Steppe reaching Volga region. Before Khvalynsk and Sredni Stog the Caucasian shift was absent from Steppe while in EBA the homogenized Caucasian shift became the main signature of Yamna and CWC.

Offcourse the data is still insufficient to make definitive judgements about the PIE homeland but wherever it was it couldn't be very far from Caucasus. At last if we rely on those Steppic migrations.

From linguistic point of view this situation nicely supports the Ranko Matasovic's paper.

Areal Typology of Proto-Indo-European: The Case for Caucasian Connections

This paper re-examines the evidence for early contacts between Proto-Indo-European (PIE) and the languages of the Caucasus. Although we were not able to find certain proofs of lexical borrowing between PIE and North Caucasian, there are a few undeniable areal-typological parallels in phonology and grammar. Some features generally attributed to PIE are not found in the majority of languages of North and Northeastern Eurasia, while they are common, or universally present, in the languages of the Caucasus (especially North Caucasus). Those features include the high consonant-to-vowel ratio, tonal accent, number suppletion in personal pronouns, the presence of gender and the morphological optative and, possibly, the presence of glottalized consonants and ergativity.

Few comments on this maps.

Few comments on this maps.

The author of this maps Guido Garducci has no single peer reviewed paper. More ever I couldn't find any paper authored by him the last time I checked this subject.

So most of his claims should be taken with caution.

Nevertheless he decided to write a book on Iron Age pottery in historic Armenia. And proposed a name Nairi ware.

What he calls "Nairi ware" is usually labeled "grooved ware" in academic papers.

The grooved ware spread all over historic Armenia immediately after the late Bronze Collapse in 1200 bc. In many places grooved ware people created new settlements.

Scholars usually place the origin of this type pottery in the East or North of historic Armenia, were more older specimens of grooved ware are found.

Veli Sevin linked it with Mushki specifically mentioning that it was an IE tribe. The timing is very good for Mushki theory. Graducci is also mentioning Mushki in relation to grooved ware.

Despite this Sevin's opinion was criticized for giving exclusivity to IE Mushkis and an alternative theory was proposed that it was Uruatri people pottery. This theory also has good timing but has other problems because Uruatri was initially a small polity. Interestingly the grooved ware was present in Urartu but the distinctive Urartian red elite pottery is not directly related to it.

And finally it must be noted that Lchashen culture was relying on grooved ware at last since 1500 bc till the arrival of Urartu at 800 bc. Here the link of ethnicity with a pottery is very secure.

So finally who were those people spreading the groove ware at Early Iron Age (1200bc) all over historic Armenia?

Almost certainly not the Nairi because the term Nairi is mentioned before the 1200 bc. But offcourse they settled in the lands of Nairi also and became part of it.

In other peripheral regions also the grooved ware people were assimilated by the neighbouring Luwian , Semitic cultures. 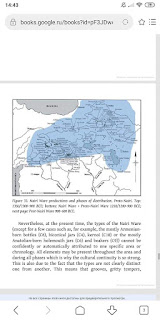 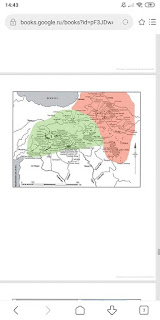 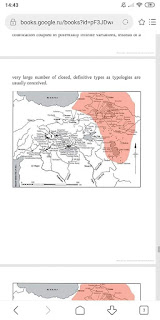 Email ThisBlogThis!Share to TwitterShare to FacebookShare to Pinterest
Labels: Archaeology

The life in Middle Bronze Age Armenia portrayed on a goblet.

The life in Middle Bronze Age Armenia portrayed on a goblet. According Pavel Avetisyan it is during this period that we see the first apparition of such concepts as kings and states on the territory of modern Armenia.

Prior that we see mostly feminine figurines (mother goddess?) from Kur-Araxian layers.

More details about the silver goblet from Karashamb. 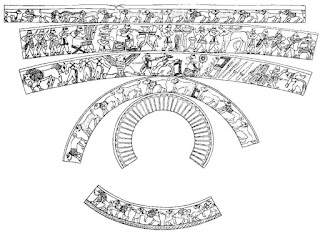