We have Syunik regional files in G25 format

We have Syunik regional files in G25 format.  Special thanks to Mher Ishkhanyan for providing the files and Robert Navoyan for his perseverance for pushing forward the process.

I updated the Davidski's standard model for our purposes. I added two new pops Central-Farmers and CHG. And removed the Kura-Araxes because it's a late and composite pop.

Syunik Armenians are close to other Armenians. Which is another evidence that modern Armenians are quite tightly connected to each other people.

They have their own peculiarities which were partly predicted in my Gedmatch analysis. They have slightly more Steppe and less Levantine affinity than the average. This difference almost certainly is the distant echo of Iron Age situation, and do not represent any important recent event.

Events that could have affected Syunik gene pool in post EIA historic times are the influences from Iran, which is well known.  You can notice higher Zagros. It is this high Zagros coupled with Steppe that makes Udi closer to Syunik Armenians and not the CHG. As one can easily note Udis have quite low CHG compared to Daghestani speaking Laks. Which once more confirms the fact that current Udi gene pool do not represent a genuine Daghestani ancestry.

Finally I add the RISE397 sample from EIA Syunik just prior Urartian expansion. The main changes that occured in Urartian and later periods are the increase of Zagros and Anatolian ancestry in Syunik at the expense of Steppe. In most likelihood this change is due to mysterious Biainili people influence.

PS Syunik average was made with 11 samples. 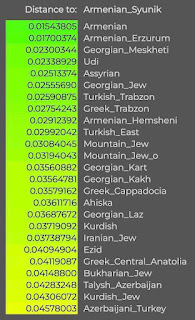 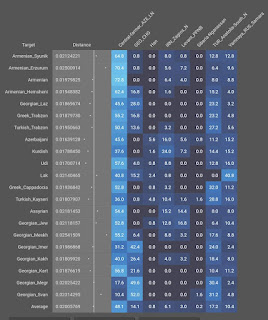 The excerpts are from Klimov's Etymological dictionary of Kartvelian languages.

The excerpts are from Klimov's Etymological dictionary of Kartvelian languages. The proposed age of Proto-Kartvelian divergence is 4200 years before present. Others proposed slightly higher ages. Anyway it's safe to assume that it occured in Middle Bronze Age.

The first separation are Svans. Later Zan languages separated from Georgian ( or Kartli ) at 2600 years ago. While in medieval period Zan itself splits to Mingrelian and Laz.

Georgian was the language spoken in historic Iberia. Which in medieval period expanded thanks to the emergence of unified Georgian kingdom under the rule of Bagratids.

With current genetic and archaeological data combined the most likely place of proto Kartvelian divergence might be in Western Georgia in Bronze Age. Where they were dwelling before Bronze Age is a different subject. But in most likelihood their ultimate origin is in Fertile Crescent.

Gamkrelidze proposed a slightly Eastern homeland but current genetic data do not support that. First we can't place their divergence homeland in Eastern Georgia because in Western Georgia there is no Steppe ancestry. While Eastern Georgia might have a lot of it in MBA. If a migration from East to West occured in MBA that would definitely had left traces.

The other reason is the archaeology. Eastern Georgia had Kur-Araxian culture in EBA and Trialeti-Vanadzor in MBA. Non of this culture fits for Proto Kartvelian homeland.

Some believe that proto Kartvelian homeland was more southern toward Anatolia. But that's also is not feasible. Given that modern Western Georgians have excessive affinity to Eneolithic western Caucasus (CHG rich ) and less to Anatolia. Should an important migration from South to North have occured they would have more Anatolian ancestry than they have today. Which is not the case. Also their popular Y dna do not fit this theory.

So we are left with the only one solution. To place them in Western Georgia.

Nevertheless this theory is not without problems. Because in Western Georgia there is also evidence of ancient NWC like onomastic. Gamkrelidze mentions evidence of NWC like substrate in Svans. Also there are very few hydronymes with obvious Kartvelian etymology. One of such a Kartvelian name according Klimov is Chorokh which appears in Greek sources much later than the Akampsis/Boas names.

One solution to overcome those contradictions is to imagine that NWC related groups were initially more prevalent in coastal regions while Kartvelian were in mountain regions of Western Georgia. Later they expanded toward coastal regions. It is probably during those expansions that the term Sanni ( or Tsanni ) appears in Greek texts. 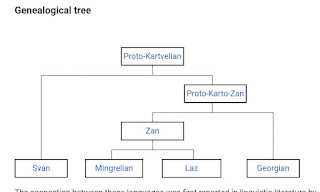 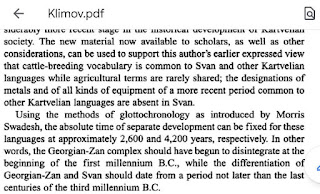 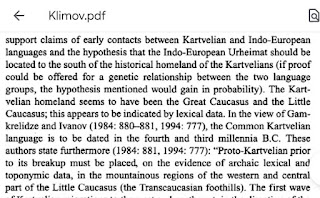 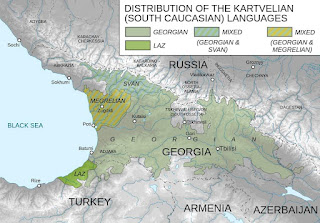 Urartu used not only cuneiform writing system but also hieroglyphic. They were similar to Hittite-Luwian ( first picture second column) but not identic to them.

The script is not deciphered. But some basic understanding what they represent is known.

Some of this (not all) symbols reached Medieval Armenian period. A set of symbols were used for short writing called Meaningful Symbols (Նշանագիրք Իմաստնոց). The last column of first image. Although Acharyan was critical about the idea that those symbols were directly from pagan times.

The map represents sites were those hieroglyphs were found. Luwian hieroglyphs ( rectangle ) are mostly west of Euphrates. While most of Urartian hieroglyphs are found in modern Armenia ( Etiuni ). 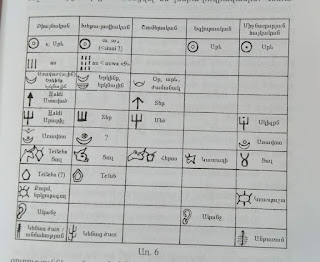 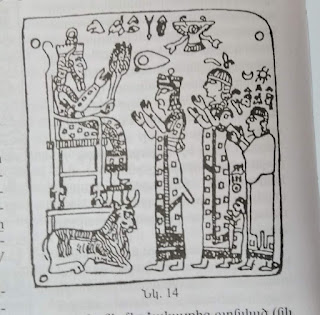 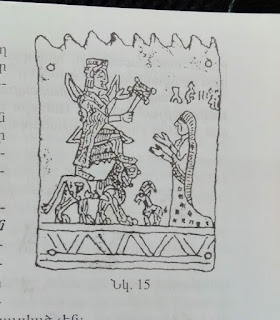 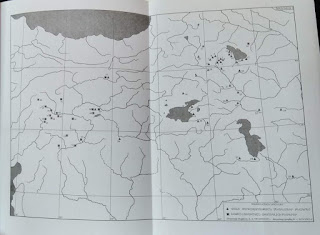 Some names have multiple variants. With somewhat different suffixes. Some roots can create different toponyms. Like the wiyan meaning wine.

But the most important thing is the absence of such a term as Azzi-Hayasa or Hayasa-Azzi in cuneiform texts.

Both terms are separate with their own determinant URU. Forlanini do not use Hayasa-Azzi but mentions them separately claiming that Azzi was a different name for Hayasa introduced in Mursili 2 period. He treats them as synonyms of same kingdom.

They are other interesting toponyms there that I will discuss later. 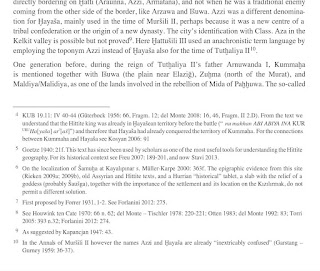 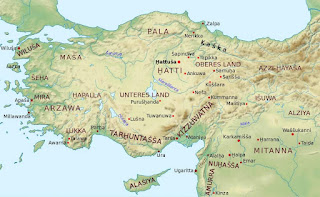 When Arabs conquered Armenia and Caucasus a new administrative and political unit formed known as Emirate of Armenia.

When Arabs conquered Armenia and Caucasus a new administrative and political unit formed known as Emirate of Armenia. This Emirate was divided itself to four subunits. Armenia I, II , III and also the special Emirate of Tiflis/Tbilisi. The internal borders were mostly the same as during the division of Armenia at 387 by Rome and Persia. So they not reflect necessarily ethnic borders but rather the political choices of Sassanian Persia. In fact it is during this period that the last Caucasian Albanian texts were written.While with the emergence of Tiflis Emirate many Iberians moved to west, where the nucleus of future unified Georgian kingdom emerged in the form of Tao-Klarjeti curopalate/kingdom.

Initially the Emirs were Armenians but later Arab Emirs were appointed.

Anyway the Emirate was enjoying large degree of autonomy.

The second map is the detailed one of the first. With Araibc terms. Made by Hewsen. While the third is the situation in 4th century made by the historian Armen Ayvazyan. It describes the lands that the four neighbors of Armenia, got from that division, which is known as Peace of Acilisene. Also important battles of 5th century. The most famous being the Avarayr battle. 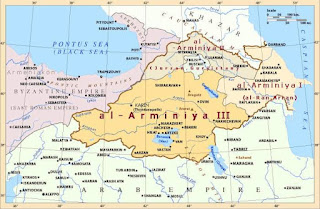 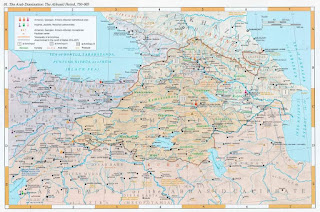 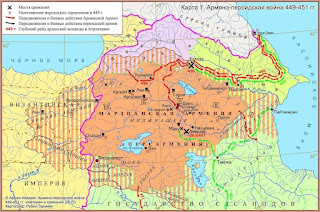 This stone with unknown cuneiform was found in Karmir Berd ( do not confuse it with Karmir Blur ) site. In Early Iron Age layers (1100-850bc) at the foundation of cyclopean fort.

It was first published in 1976. Later two other similar inscriptions where found. One from modern Armenia the other from Nakhichevan region of Azerbaijan.

The cuneiforms are different from Urartian one and in most likelihood are based on alphabetic system rather than syllabic.

Artak Movsisyan assumed that it was an alphabetic writing system invented by locals. Other known alphabetic cuneiform systems are the Ugaritic and Persian. But this one is not related to them. 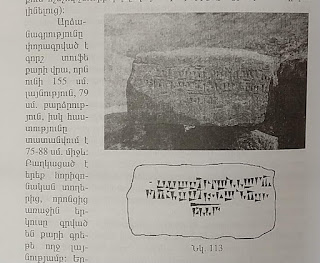