Alexei Kassian discuss the possible connection between Sumerian and Hurrian languages. He compares the list of basic vocabulary and finds six possible cognates. Then calculates the probability of chance coincidence and deduce that it is quite low.

In the first some Hurrians migrated to South and mixed with Sumerians and the second a group of Sumerian related people move to North and shifts to proto Hurro-Urartian. He prefers the first and links it with Kur-Araxes expansion to south but the latter is more probable from linguistic point of view. I must add that it can fit archaeology also given that Chaff faced ware pottery (4300-3600bc) was a southern influence from North Mesopotamia.

The next issue in this paper is that he believes in Sino-Caucasian theory, and wants to see HU as part of it. Which obviously is very problematic given that genetics do not support it's existence.

He cites Fournet but do not discuss in details other words that can be Sumerian - Hurrian cognates.

The word apple in Sumerian hašhur/ ha-šu-ur compare with hinzuri in Hurrian. Fournet demonstrated that Hurrians were adding [n] in the middle of word like in Puratu>Purantu (Euphrates) which means that the initial form of hinzuri was *hizur an obvious cognate of hashur.

Another interesting word is the en meaning god in Hurrian, inua goddess in Urartian. Compare the Sumerian Anu the sky god.

There are other fruit words like pomegranate and plume but they are believed to be via Akkadian intermediation.

He also discuss the famous and well accepted word tibira in Sumerian meaning sculptor, craftsman which is compared to Hurrian tabira meaning smith. This word is believed to be of Hurrian origin. Some (but not all) links the Armenian darbin (smith) with it.

The etymology of the term Getaru by Hrach Martirosyan.

The etymology of the term Getaru by Hrach Martirosyan. The term Getar(u) appears in various places including the Caucasian Albania. This latter is also mentioned by Ptolemy.

The older form of this word might be *wetaru , so it would be interesting to compare it with Uiteruhi /Witeruhi (in Etiuni) attested in Urartian texts. The extra -hi is an issue but it can be related to Urartian suffix -hi which they were adding to various population names.

A doctorate about Umman-Manda. The Umman-Manda or Troops of Manda was not a specific nation but rather a religious concept that formed on the basis of empiric evidence. That barbaric invasions are regular events and they are sanctioned by gods to destroy the civilisation. Then gods help to defeat the barbarians and civilisations restarts

The first such a barbaric tribe were the Gutians (~2200bc), while the last two tribes who got this title were the Medes and Cimmerians.

There is a chapter dedicated to a certain Arakhab who was a leader of Ma(n)da circa 1650bc. This name is quite close to Arakha the Armenian attested in Behistun. Henning proposed that this might be a Gutian name given the final -b. Some proposed a Medes link. But the author dismiss the Medes link and propose that he was a just a leader of a rebellious group with unknown ethnic affiliation.

The author discuss various etymologies of the term Manda and choose it's Sumerian origin.

Umman-manda (literally “Troops of Manda”) is an Akkadian compound expression used to denote military entities and/or foreign peoples in a diverse number of texts pertaining to separate periods of ancient Near Eastern history. The dissertation initially discusses the various difficulties in ascertaining the etymology of the second component of the term Umman-manda. A very plausible etymology is proposed based on new research on the semantic range of the Sumerian word mandum. The thesis then focuses mainly on the references made to the Umman-manda in the Neo-Assyrian and Neo-Babylonian sources, where it is used to denote the Cimmerians and Medes respectively. The starting point is that these references are making literary allusions to the Standard Babylonian version of the Cuthaean Legend. New information gained from these literary allusions provides insight into the significance of the term Umman-manda in the first millennium B.C.: it recalls the various attributes of the Umman-manda depicted in the Cuthaean Legend and applies these attributes to contemporary political events. The Cuthaean Legend envisions a powerful enemy that emerges unexpectedly from the distant mountains and establishes hegemony after a sudden burst of military power. This enemy will eventually be destroyed without the intervention of the Mesopotamian king. The thesis studies how the Neo-Assyrian and Neo-Babylonian sources allude to the Cuthaean Legend and in this way they identify the Cimmerians and the Medes as the Umman-manda.

Tibia was famous because the king of Kashkians who attacked Hittites was from that place.

Forlanini is inclined to believe that Tibia was a Mossinoico term, but the Nairi dictionary links it with Tibaren.

Whatever it was it seems that the legacy of Bronze Age Kashkians was present in North Anatolia in Greek period, but with different names. 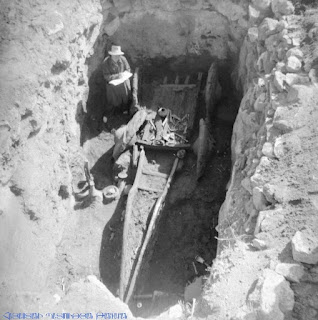 Maybe I missed this from Petrosyan's paper, but the etymology of Argishti from the word argos meaning white, shiny needs also to explain the extra -ti at the end.

Maybe I missed this from Petrosyan's paper, but the etymology of Argishti from the word argos meaning white, shiny needs also to explain the extra -ti at the end. Here an example below (Atreides) from Greek what it could be his function. Argishti which in most likelihood was pronounced as Argisti where the last -ti could mean descendance from a Argis. Basically the same as the Colchian name Argus.

If You look old Greek names the final -ti/te is frequent there.

So Argisti has a good etymology in Graeco-Phrygian type languages. The question is was this just similarity or we can really speak about the presence of an unknown Paleo-Balkanic tribe (not necessarily Greek ) in ancient Armenia. I think if we take into account words like burg-, udur, Rusa, then this presence become quite realistic.

The word Atreides refers to one of the sons of Atreus—Agamemnon and Menelaus.[2] The plural form Atreidae or Atreidai refers to both sons collectively; in English, the form Atreides (the same form as the singular) is often used. This term is sometimes used for more distant descendants of Atreus.

A table representing ancestry proportions of Armenians who have four grandparents from the same region.

A table representing ancestry proportions of Armenians who have four grandparents from the same region. Ancient DNA and averages from academic papers (Behar, Yunusbaev) are also included. It must be noted that this calculator is obsolete. Today there are more sensitive tools to measure ancestry proportions based on real ancient populations. I use this tool because the data there is more abundant.

The two most stable components, with low variance are the Gedrosia and Atlantic_Med. The first is related to ancient Iran Neolithic. As You can see the highest Gedrosia is found in NW Iranian sample from Hasanlu. While the Atlantic_Med is related to Anatolian Neolithic farmers and as expected the highest levels is found in Malatya Bronze Age. You can also notice that all sampled Armenians have lower Atlantic_Med than the ancient people from Malatya and Alalakh (Cilicia). And subsequently higher Gedrosia than the ancient samples from the same regions. But not higher than the level found in NW Iran and Armenia_LBA.

The components that show the highest variance are the SW_Asia, North Europe and Caucasus. The Caucasus component do not show any regional correlation. The Western Armenians have as much Caucasus as Eastern. And at last one person from Urfa do have even more than many Eastern Armenians. The erratic behavior of this component is due to fact that it is a very mixed component harbouring both Anatolian and Steppe alleles. Sometimes it can even mask alleles of non Caucasian origin like in the case of that person from Urfa.

The North Europe component do show regional pattern. It is higher in Eastern Armenia and reaches the lowest levels near the Euphrates river. But increases once more in Cilicia region for obvious historic reasons. North Europe is related to Steppe ( Yamna ) ancestry but is NOT equal to him. The real Yamna ancestry is probably higher by 3-5 percentage points depending of regions. As You can see in ancient Republic of Armenia it was very high while in ancient Malatya and Alalakh (Cilicia) it was zero, which is confirmed by other more advanced tools also. This high level of Steppe ancestry in ancient Republic of Armenia is explained by Middle Bronze Age (2400-1600bc) incursions from North via Caucasus. In the current stage of our knowledge the Y DNA R1b-Z2103 and I2-L596 were introduced to Armenia by this migrations. With time "North Europe" spread to west and south. In Early Iron Age ( after 1200 bc ) it was in most likelihood present in all historic Armenia and even outflows in nearby regions. It must be noted that those migrations from East/North to West/South also increased "Gedrosia" in Western Armenia. Starting from Urartian period (after 850bc) this trend reversed. Modern Republic had witnessed various episodes of gene flow from Southern parts of historic Armenia which diluted the Steppe and increased the SW_Asia in Eastern Armenia. While the Atlantic_Med remained stable.

The next component that show regional variability is the SW_Asia. This is a complex component partly related to Levant and partly to Anatolia and Fertile crescent in general. Western Armenians have more of it than Eastern ones for obvious geographic reasons. As You can see in the past this component was much higher in Malatya and Alalakh ( Cilicia ). And very low in modern Republic. Over time the intra Armenian migrations that I mentioned above had reduced the level of SW_Asia in Western Armenians and increased in East.

In conclusion modern Armenians are much more homogenous and close to each others than the ancient inhabitants of Bronze Age historic Armenia and it's neighbourhood. This homogenization is due to common identity, language. But the traces of ancient events are still perceptible with thorough analysis. 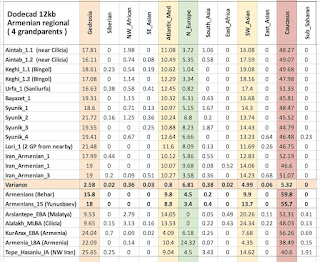