Y DNA from ancient Near East

In the proposed study, the mtDNA HVI and HVII region sequences (354 and 217 bp, respectively) of seven ancient samples collected from Cemialo Sırtı (Batman) excavation site in the southeastern of Anatolia were successfully obtained. The mtDNA HPG compositions of these ancient human samples were determined. The mtDNAhaplogroups of seven ancient individuals were assigned as H1z1, M1a, U2b1, H1a, HV, R2 and R6 and PhyloTreemt (http://www.phylotree.org/) was used for determination of the mtDNA haplogroups. Furthermore the mtDNA HVI - HVII region sequences of seven samples were comparatively analyzed with some modern human populations and various Neolithic populations that were retrieved from databases from Northern Syria (8000 BC), Central Europe (6000-1550 BC)
and Southern Paris (5000-4000 BC), including the Sagalassos population which is an ancient Byzantium population (11th–13th century Common Era (CE)) near from Ağlasun/Burdur in the Southwestern Anatolia. This study is the first study where the questions about the human ancient DNA (aDNA) are addressed in the dedicated ancient DNA laboratory of Middle East Technical University (METU), Ankara, Turkey. 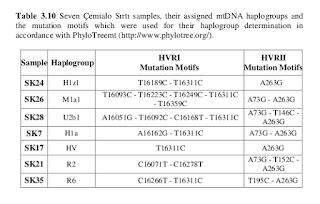 
Do this presence of Indian mtDNA means that Indians started to arrive in Taron earlier than was presumed?

However, only in the canton of Taron did the efforts to protect the pagan temples grow into a full-scale, though self-consciously hopeless, insurrection. Most of the rebel force was put up by the Armenian-Indian theocratic principality or, more precisely, a warrior temple association founded by the Indian tribes who migrated to Armenia some two centuries earlier, presumably, during the reign of King Tiridates I (63-88 CE).

Tiridates I had ordered them to settle in this strategically important area and supply his army with trained cavalry and infantry, which they did loyally. By the fourth century these Indians had grown to a population of up to 100,000, and they had already been partially assimilated into the Armenian society: 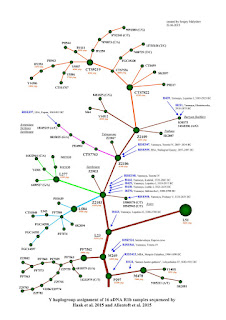 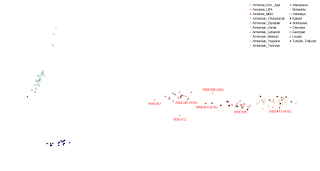 Why Balcanic theory of Armenian's origin is not working


The probability that Armenians came from Balkans is very low not to say impossible.

Genetic evidence.
* Marc Haber et al. paper shows that Armenian cluster started to form aproximatively at 2500 BC ( between 3000 and 2000 BC ). And there is no any new admixture after 1200 BC. So Armenian language coming after 1200 BC is impossible.
* If Armenians lived/passed in/trough Balkans so they must have some significant number of Balkan specific Y DNA. This is not the case. Yes there are some Balkanic Y DNA but there are in marginal numbers. Also this Balkanic Y DNA can come from various episodes, starting from Neolithic to Middle Ages ( Byzantine period ) [1]
* The most recent Haak et al. study shows that R1b-Z2103 was present in Yamna and there is no need to make big circle around to Black Sea to come to Armenia. There was much shorter route to Armenia from Yamna. A migration of R1b trough Caucasus.

Archaeological evidence.
* There is no any archaeological evidence of people moving from Anatolia to Armenian plateau after 1200 BC. In contrary there is an evidence of people moving from Armenian Plateau to ex-Hittite empire territories. An example are the so called Eastern Mushkis. It is logic because there was a power vacuum in Anatolia after Hittite collapse. This Eastern Mushkis are most probably the related Cappadocians (Mazaca modern name Kayseri)
* The so called Phrygian ceramics enters to Anatolia later at 1000 BC from Western side of Anatolia. So it's highly improbable that Phrygians were the destroyers of Hittite empire. And this new Phrygian ceramics just stopped at the western side of Euphrate.
* There is a very strong archaeological evidence that the most newcomers entered Armenia from the East not the West. There are two main routs from the east. The Kur valley and the Arax valley. Starting 2800 BC Kura-Arax culture started to collapse from a pressure from the Eastern side (Daghestan later they moved by Kur valley). The newcomers bring with them a culture that can be associated with early IE.
* In contrast to Eastern Armenia The Kur-Arax culture continued to flourish in South Western Armenian Plateau, till 2000 BC. Later on this basis appears Hurrian cities.
* After 2000 BC there is a new wave of influx. This newcomers founded the Trialeti culture that also have a strong IE traits. This culture can be associated with Proto-Armenians. The Trialeti culture then reaches his peak at 1700 BC ( at this period the Armenian language is on the same stage of development as the Mycenean Greek in Greece ) and later evolves to more homogenous Metsamor-Lchashen culture all over the Armenian Highlands. This process of homogenization ends at 1300 BC. Just in accordance with Marc Haber genetic admixture data.

Historians
*  The origin of Herodotus claim could be the result of confusion between late Armenised Cappadocians and the real Armenians from Highland. Cappadocians are related to Mushkis. The founder father  Mesech from Mushki tribe founded the city Mazaca (modern Kesarya). In ancient Assyrian sources Phrygians are called Mushkis, and also there was another non-Phrygian tribe who settled in Cappadocia and Taurus that also where called Mushkis. Historians call them Eastern Mushkis. So this confusion of common origin of Phrygians and Armenians could came from the same name attributed to Phrygians and people living East Anatolia who where Armenised in later periods.

Summing all this facts We conclude that Armenian branch of IE entered Armenia from the East circa 2800 - 2000 BC. The Balkanic theory is outdated.