For long time rumours were circulating about the 18th dinasty of Ancient Egypt being predominantly R1b-M269 Y dna.

For long time rumours were circulating about the 18th dinasty of Ancient Egypt being predominantly R1b-M269 Y dna. Well it seems that those rumours were not baseless. At last the few STR that we have point to that direction. Off course it would be good to have a much better analysis to learn more details but that will need time.

Now the Hyksos connection is the most rational explanation except that I would not advise to jump to linguistic conclusion rapidly. This is because that before moving to Egypt the R1b must have spent some time in Levant where he could have shift to Semitic or Hurrian languages.

Ramses III also was tested and he was E1b.

Yuya was G2. He was the grandfather of Akhenaten from maternal side. Akhenaten's mother was Tuya.

“An investigative study was carried out on the familial relationships of a number of late 18th dynasty mummies (ca. 1550–1295 B.C.), including that of Tutankhamen. The study was based on the analysis of the autosomal and Y-chromosome STR markers in addition to mitochondrial hypervariable region 1 sequences. A 4- generation pedigree of Tutankhamun’s immediate lineage and the identity of his ancestors were established. The Royal male lineage was the Y-chromosome haplogroup R1b that was passed from the grandparent [Amenhotep III] to the father [KV55, Akhenaten] to the grandchild [Tutankhamen]. The maternal lineage, the mitochondrial haplogroup K, extended from the great-grandmother [Thuya] to the grandmother [KV35 Elder lady, Queen Tiye] to the yet historically-unidentified mother [KV35 Younger lady] to Tutankhamen.” 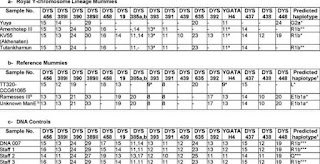