There are some terms coined by scholars that creates more confusion than help to understand the situation. One of such a term is the Arme-Shubria used by Diakonov and some other Soviet period scholars. If You search the internet You will note that this term is practically never used by western scholars.

And they have good reasons to do so. First in the long list of Mesopotamian onomastics You will never find such a term. ( see the link in comments ) Neither there is such a term in Urartian texts.

The term Shubria (Shubriayu as an ethnic name ) is well attested in Neo- Assyrian period. It''s two royal cities (Kullimeri and Uppume see the map ) are localized quite precisely. Thanks to this scholars place the kingdom of Shubria usually in the sources of Tigris river. Which makes sense because this kingdom was also the religious center dedicated to deified Tigris.

Shubria is not attested in Urartian texts. Instead of that we have numerous mentions of Urme in inscriptions found around Mush city in modern Turkey. Based on that Melikishvili made the assumption that Urme and Shubria are the same. Diakonov was more cautious he first placed Urme in north of Shubria but later started to merge them.

But the most realistic localisation Urme is in Mush region ( I added in the map in red ). As You can see Urme is more northern than Shubria and there is no reason to believe that they were the same country or had form any political alliance for which there is no much evidence.

Things become even more complicated if we try to figure out what was Arme with it's royal city Nihiria attested in Urartian texts but NOT Assyrian. One simple solution is that it was the same as Urme but in most likelihood it was a distinct small kingdom in western or south western parts of Urme probably ethnically related to Urme but not to Shubria.

Another argument that Urme might be more northern than the Shubria is that the terms like Tariuni ( Taron?) and the land Arhi (Hark') are attested in conjunction with Urme. Both were part of later Armenian Turuberan. We can even speculate that the name Urme was the old name of that large regionknown as Turuberan. This would mean that Urme was not a single kingdom but rather a tribal federation like Etiuni.

Offcourse at last in one of Mush inscriptions the Shubrian city of Qulmeri is attested in the same text with Urme but given that the whole text is damaged and Qulmeri sentence is distinct from Urme part then this last argument of any link between Urme/Arme and Shubria becomes null. Some scholars had proposed a theory that the Urartians didn't had any special term for Shubria and were calling it simply Qulmeri land.

Now why this term Arme-Shubria is bad? The answer is simple, because it obfuscates the presence of quite large country Urme in that region which almost certainly was related to Armenians. It artificially amalgams it with a Hurrian kingdom Shubria, creating ambiguity about the political situation in that region in Iron Age.

It must be noted that in English and Russian Wikipedia the Arme-Shubria page is dismantled. There are now two distinct pages. 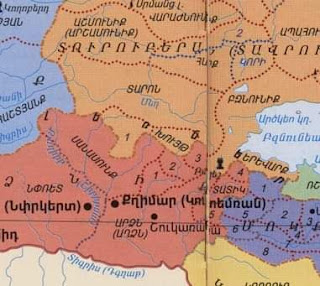 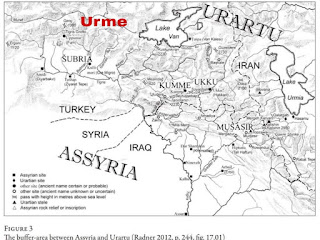